Kaloji Narayana Rao also known as Raghuveer Narayan Laxmikanth Srinivasa Ram Raja Kaloji, is a famous poet, anti-fascist, political activist and freedom fighter of the Telangana State. People respectably called him as Kalanna or Kaloji. In the year of 1992, He awarded the great Padma Vibhushan Award. He was born on 9 September 1914 and the Government of Telangana celebrating “Telangana Language Day” as Birth Date of the Kaloji Narayana Rao. 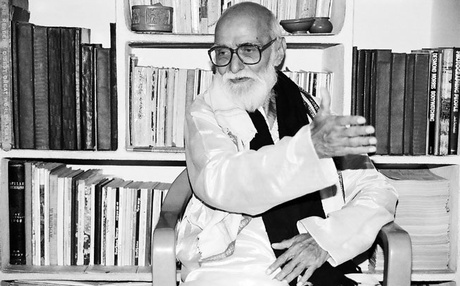 Kaloji father’s name was Kaloji Ranga Rao, from Maharashtra state and mother’s name was Ramabai, from Karnataka state. After few years they came to Warangal and living In Madikonda, Warangal district, Telangana state. He completed his upper primary studies in the Madikonda village and completed higher studies in Warangal as well as Hyderabad. Kaloji speaks multiple languages like Kannada, Urdu, Telugu and Marathi languages with very fluent.

In his student time, Kaloji was influenced & joined in a lot of movements, like Arya Samaj. In the year of 1934, he also involved in the formation of AndhraMaha Sabha activities. Later he participated in few activities such as State Congress, Satyagraha, Library movements, Osmania University Vandemataram and Andhra Mahasabha Anti – Razakar. Kaloji considered as a Freedom Fighter by the people. In the Hyderabad state, he joined in many movements.

Kalanna started writing the poets in his schooling time. In the year of 1931, his 1st poem published and that poet describes his reaction on murdering of Bhagat Singh. His Popular poets are Na Godava, Vyavam Parthiva, Kaloji Kathalu, Telangana Udyama Kathalu and Vijayam Thudi Manadi Jayam. He had excellent fluency in the 4 languages and in 1968, Kaloji Narayana Rao has done a great poet named Na Bharata Desha Yatra. He contributed endless efforts in the literature so that he honoured Doctorate from the Kakathiya University. Former Prime minister PV Narasimha Rao was the friend of Kaloji Narayana Rao.

Kaloji Narayana Rao gave the commitment to the Human rights and made him as a very active member in the Tarkunde Committee. He was elected to the Andhra Pradesh Legislative Council for 3 times.

Kaloji died on 13 November 2002, At that, his age was 88 years. In Kakathiya Medical College, he signed to donate the body after his death for the development and improvement in medical science. He is the most inspirational person in the world.

Kaloji Narayana Rao University of Health Sciences is simply abbreviated as “KNRUHS” is developed the medical education with the help of resources of nature for the cure of diseases.